I want a Plug In Hybrid Now! 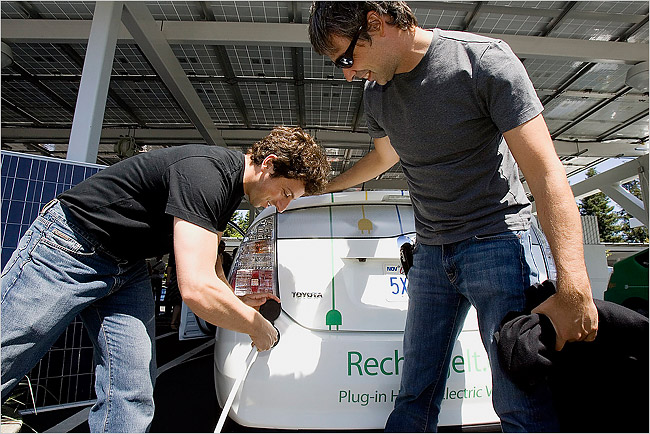 The NY Times reporting that Google and Utilities are collaborating to test plug-in hybrids that get unbelievable mileage and give back electricity to the grid:

The companies displayed on Monday six Toyota Prius and Ford Escape hybrid vehicles modified to run partly on electricity from the power grid, allowing the vehicles to go up to 75 miles on a gallon of gas, nearly double the number of miles of a regular hybrid. They also modified one vehicle to give electricity back to the power company.


The highly unusual test takes the hybrid, which is now familiar on American roads, a step further by using extra batteries to hold energy made and distributed by a power company. The technology is eagerly awaited by energy experts and environmentalists, but is not yet ready to go commercial because the additional batteries are not yet durable enough.


I can't wait to get my hands on one of these. I'm even looking into conversions myself - to take a Toyota Highlander to the next level of plug-in hybrid and get 40-50 mpg+.

Ideally, sooner than later, I'll have a solar house and a plug-in hybrid so I can do all my local driving on the power of the sun. (and more ideally, as I've mentioned my desire for previously, a plug-in hybrid diesel that I can run on recycled veg oil). And then gas prices - what will those be..?

Literally a year ago today, I posted a story about how dust from cattle grazing, off-road vehicles, and other disturbances has been found to be causing earlier snowmelt in Western U.S. Mountain ranges.

Well now, in a new study, U.S. scientists have found that "dirty snow" is a significant contributor to global warming. As reported by The Province of Canada:

The researchers have measured how snowy landscapes tainted by carbon particles from inefficiently burned fuels and forest fires are absorbing more of the sun's heat than the less sooty snow cover of centuries past.


"Snow becomes dirty when soot from tailpipes, smokestacks and forest fires enters the atmosphere and falls to the ground," the team explains. "Soot-infused snow is darker than natural snow. Dark surfaces absorb sunlight and cause warming, while bright surfaces reflect heat back into space and cause cooling."


Even a slightly darkened surface impairs the natural reflective properties of snow crystals, say the scientists, who calculated that dirty snow accounts for a startling one-third of rising temperatures in the Arctic over the past two centuries.


I've recently commented on several stories (including the recent National Geographic) noting how the melting of glaciers is accelerating unexpectedly quickly. And I've been pondering how while we can pinpoint some of what's causing this, we just have no idea about many of the feedbacks we're triggering that are causing these changes. Until some creative scientists such as those above test a hunch and come up with positive results, and identify a new mechanism contributing to global warming.

I read articles like this - about pollution darkening snow, which then melts, and then the darker color of the melted areas absorbs more heat, further accelerating warming...

There are few unsustainable practices dumber than buying bottled water, which usually comes in cardboard cases sealed with plastic.

I love the subhead of this article on the question of whether bottled water is any better than tap water (it usually isn't): Americans are spending billions on a drink that is virtually free.

The sad thing is that only about 23% of those little plastic bottles get recycled. For awhile now, people have been saying that a solution would be to add them to state bottle bills, so there is a financial incentive to recycle them.

Well, Oregon has just stepped up, adding water bottles to its bottle bill (and also establishing a free statewide recycling program for electronics!)

Nick over at The Triple Pundit thinks that there are probably some pretty lucrative business opportunities waiting to be found in uses for all this plastic material that will now be kept out of landfills...

Why Species Endangerment Matters to You

Grist has posted a great, albeit sad article about the decline of many of the world's bird species.

Seldom emphasized in mass media discussions of the Endangered Species Act is the implication of species endangerment to people - that the decline of a species is, in many cases, an omen of trouble to come for humans. As the article so eloquently poses:

How long 'til we get the hard fact that the indicator species that are disappearing are pointing a ghostly finger -- tentacle, talon, hoof, claw -- in our direction? A language we don't understand or are incapable of hearing is whispering, "This will affect you."

In two examples of this off the top of my head:
Anybody out there have other examples? Please do provide them in the comments.

As a conservation biologist, I have watched for too long as time after time, politics trumps science when it comes to protecting endangered species. What will it take to move beyond this problem? As with changing public perceptions of other hot-button political issues, my take is that this is a job for the framing experts out there. Specifically, endangered species need to be reframed from being communicated as "threats to economic freedom" to 'canary in the coal mine' type indicators whose condition can help humans identify and avoid looming economic and social problems.

NY Times: Detroit Sees Green (I'll Believe It When I See It)

The NY Times has an article about Detroit and US carmakers finally seeing green.

Frankly, I'll believe it when I can buy an American made plug-in hybrid diesel SUV that gets over 40 mpg and I can run it on used vegetable oil, and that I can trust to be as reliable as my Toyota.

First, reliability - sorely lacking by most American cars compared to their Japanese counterparts - is also as green as Kermit the Frog. Because it means not having to spend time and money on new parts and materials as a result of the car always seeming to need to go into the shop for one problem or another (my last experience with an American car).

This problem has kept me restricted to considering Toyota's or Honda's for their reliability. But I'm now personally unable to support Honda because they make those annoying ATVs and dirt bikes that I'm having a harder and harder time escaping the sound of at my favorite camping spots. Beautiful places where I used to be able to go for some peace, now it's the sound of ATV's - worse and worse every year. Maybe Honda should put some ATV profits toward educating their customers in how to be considerate. And how to not cause the considerable environmental damage they are causing.

Additionally, I just won't be able to stomach purchasing an American car until the Big 3 stop fighting Congressional attempts to raise fuel efficiency standards. Not just baby steps, like the pathetically inadequate increases passed over the last few years. But the big-time major increases required to both fight climate change and broadly boost the U.S. economy (because money not spent on gas can be spent on electronics, home improvements, travel, clothing, you name it). Here I am paying more and more for gas and needing a more fuel efficient car that meets my driving and transportation needs. So when the Big 3 fight increases in fuel efficiency standards in the U.S., it hurts my bottom line, and I don't appreciate that.

Clearly, there is currently an outstanding opportunity for American carmakers to do their part to (1) help America achieve freedom from foreign oil, (2) prevent a climate crisis, and (3) come to the rescue of an American public tired of the high gas prices that are hurting our pocketbooks. Articles about Detroit seeing green in the NY Times aside, I'll believe it when I can both buy it AND trust it to be as reliable as my Toyota.

Don't get me wrong - I'm rooting for them!

But until then, I just don't have any interest in buying an American car.