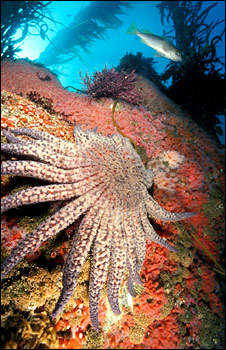 The UN today issued a new report that warned of the economic impact of biodiversity loss:

The relationship between nature loss and economic harm is much more than just figurative, the UN believes.
An ongoing project known as The Economics of Ecosystems and Biodiversity (TEEB) is attempting to quantify the monetary value of various services that nature provides for us.
These services include purifying water and air, protecting coasts from storms and maintaining wildlife for ecotourism.
The rationale is that when such services disappear or are degraded, they have to be replaced out of society's coffers.
Loss of coral reefs will reduce humanity's supply of seafood

TEEB has already calculated the annual loss of forests at $2-5 trillion, dwarfing costs of the banking crisis.
"Many economies remain blind to the huge value of the diversity of animals, plants and other lifeforms and their role in healthy and functioning ecosystems," said Achim Steiner, executive director of the UN Environment Programme (Unep).
"Humanity has fabricated the illusion that somehow we can get by without biodiversity, or that it is somehow peripheral to our contemporary world.
"The truth is we need it more than ever on a planet of six billion heading to over nine billion people by 2050."
The more that ecosystems become degraded, the UN says, the greater the risk that they will be pushed "over the edge" into a new stable state of much less utility to humankind.
For example, freshwater systems polluted with excess agricultural fertiliser will suffocate with algae, killing off fish and making water unfit for human consumption.

The main question that I keep coming back to is how we go about enacting land use plans that simultaneously protect biodiversity and human well-being without ticking a lot of people off.

How can we make conservation both possible and profitable, and transform the public's perception of biodiversity conservation from a threat to their economic well being to a new revenue opportunity?  It comes down to creating smart land management and policy solutions that reward property owners for the conservation value that their lands provide to society -- perhaps via some form of payments for ecosystem services system.

The bottom line is that humanity is still working on management and policy solutions for making conservation an economically viable alternative to extractive uses.  We're getting there in some places, but in many others, we've got real work to do.