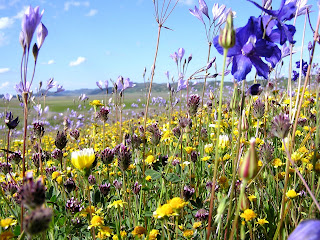 Earlier this week, I was sitting in a cafe reading a great book about ecosystem services titled, "Nature in the Marketplace" by Geoffrey Heal. In the chapter about "Policies and Institutions", Heal discusses the decline in not only pollinators, but also predators of agricultural pests that has resulted from the vast size and monoculture nature of mega-agricultural fields.

Birds (key predators of insect pests), he notes, "generally do not fly across wide expanses, preferring to move from greenway to greenway." He continues:

And indeed, the traditional farm was edged by woods and broken up with hedgerows. There is clear evidence that such a structure gives greatly improved natural protection against pests. Even in the case of large farming operations, preserving small amounts of natural habitat in the form of woods and copses and providing hedgerows can lead to thriving populations of wildlife. Because they act as both pollinators and as predators of many common pests, this can be a cost effective approach to pest control and pollination. It may also lead to crops with higher market value, as consumers are often willing to pay more for food grown without pesticides.


Reading this made me think about something interesting that happened in my own organic garden recently - in which we plant tomatoes, various types of hot peppers, chives, corn, beans, peas, zucchini squash, eggplant, lettuce, spinach, strawberries, and a bunch of culinary herbs. To attract pollinators, we maintain strips of native California grasses and wildflowers at each end of the garden, and in an island in the middle (it also looks very nice, and is a nice backdrop for our solar fountain).

A couple of weeks ago, our landlord told me he was going to have gardeners come by the house. I emphatically told him to please make sure they don't touch the garden. We were surprised to come home the night the gardeners had come and find that all of our grasses and wildflowers had been pulled. The garden had been left completely bare except for our food and herb plants - a few of which were actually missing (they pulled 2 productive bean plants, our dill weed, and a bunch of mint and oregano). When I called and yelled at the landlord about the demolition of our garden, he told me that it had looked "messy", so he had the gardeners cut all the native grasses and wildflowers. (he's not the brightest bulb, to be sure)

Have any of you experienced anything similar to this in your garden?