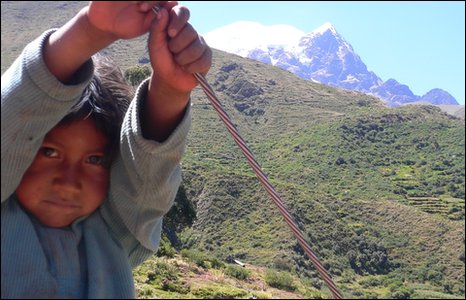 Here's a preview of an impact of climate disruption that we can expect to see become far more common in the years to come:


For the Incas, and most of the Andean civilisations, snow-capped mountains were divinities to be honoured, as they supplied water.

But now it seems those gods are losing their powers. Researchers say that the glaciers are in dramatic retreat across the Andes due to rising temperatures.

We are very worried because we have no water. Half the people of this community have already left. Those who remain are struggling with the lack of water," says Max, an elderly Aymara Indian who chews coca leaves as he speaks in heavily-accented Spanish.

For the indigenous people of Khapi everything depends on the streams flowing through their land. The waters, which they consider sacred, keep their animals alive and allow their crops to flourish.


But over the past 10 or 15 years, changing weather patterns have led to irregular water flows - the streams become torrents or dwindle to just trickles.


"The weather has drastically changed and it is now two or three times hotter than it was. We cannot water our crops and the sun and the heat are very strong. Our crops are dry now, our animals are dying; we want to cry," Max says, before asking their Andean goddess, Pachamama or Mother Earth, for help.

It won't be long before we start seeing things like this happen in the U.S. and other developed countries.  Do we really want to wait until we "get it" -- painfully -- before we take action?