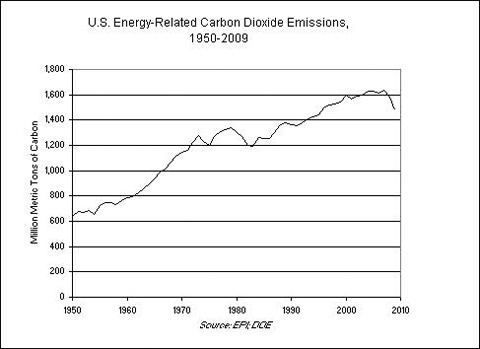 Well, this is good news:

Between 2007 and 2009, domestic emissions could drop by 9 percent — a massive decline due in part to the economic downturn, and in part to a new push to improve efficiency and develop renewable fuels — according to the Earth Policy Institute, a Washington-based environmental group.


Seeing numbers like this is a HUGE confidence boost heading into Copenhagen -- we CAN solve climate change and our dependence on fossil fuels.

Obviously, we still have lots of work to do. As Earth Policy Institute's Lester Brown is quoted in the article:

Preventing ice sheets from melting in Greenland or in the Himalayas will require cuts much deeper than those envisaged either by Congress or by negotiators ahead of the global climate summit on Copenhagen later this year, Mr. Brown said.

That would require cutting carbon emissions by more than 80 percent by 2020, and need something like a “wartime mobilization” of the economy, Mr. Brown said.

“What we are hearing is not nearly enough,” he said.


Read the full article>>
Check out Brown's piece on the subject at Grist>>
...