'Back to Nature' Cuts Flood Risks and Costs 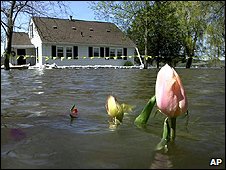 Flood plains are some of the most ecologically rich areas on earth, and in the American West, these habitats harbor an amazing 80% of the region's species diversity.  Thus, development of these sites -- both urban and agricultural -- has come at a tremendous environmental cost.

As you probably know, development in flood plains has also come at a tremendous economic cost.

Now, reports the BBC, planners are increasingly looking for economically sensible ways to restore floodplains and allow them to go 'back to nature' as a means of curtailing increasingly exorbitant costs of flood damage:

A study by US researchers said allowing these areas to be submerged during storms would reduce the risk of flood damage in nearby urban areas.

Pressure to build new homes has led to many flood-prone areas being developed.

Writing in Science, they said the risks of flooding were likely to increase in the future as a result of climate change and shifts in land use.

"We are advocating very large-scale shifts in land use," said co-author Jeffrey Opperman, a member of The Nature Conservancy's Global Freshwater Team.

"There is simply no way economically or politically that this could be accomplished by turning large areas of flood-plains into parks," he told the Science podcast.

"What we are proposing in this paper is a way that this strategy can be compatible, and even supportive, with vibrant agricultural economies and private land ownership."


One of the sites that the authors feature as an example, the Sacramento, CA area's Yolo Bypass, is an area of summer farmland that I enjoy watching flood each winter, transforming into a rich habitat for waterfowl and spawning fish alike.

This type of ecosystem management scheme, which both safeguards human communities and benefits biodiversity, is teeming with potential, and is sure to become more common as we head into the new decade.