The Economist: Why It is Important to Put a Price on Nature 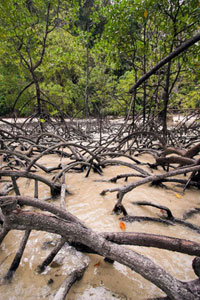 The Economist weighs in on the emerging paradigm of paying people and communities for the ecosystem services provided by their healthy natural habitats.  They report on a gathering of experts in the field who recently met to assess how things are going and plot next steps:

They looked at the progress and prospects of their attempts to argue for the preservation of nature by better capturing the value of the things – such as pollination, air quality and carbon storage – that it seemingly does for free.

Environmental valuations aim to solve a problem that troubles both economists and ecologists: the misallocation of resources. Take mangrove swamps. Over the past two decades around a third of the world’s mangrove swamps have been converted for human use, with many turned into valuable shrimp farms. In 2007 an economic study of such shrimp farms in Thailand showed that the commercial profits per hectare were $9,632. If that were the only factor, conversion would seem an excellent idea.

However, proper accounting shows that for each hectare government subsidies formed $8,412 of this figure and there were costs, too: $1,000 for pollution and $12,392 for losses to ecosystem services. These comprised damage to the supply of foods and medicines that people had taken from the forest, the loss of habitats for fish, and less buffering against storms. And because a given shrimp farm only stays productive for three or four years, there was the additional cost of restoring them afterwards: if you do so with mangroves themselves, add another $9,318 per hectare. The overall lesson is that what looks beneficial only does so because the profits are retained by the private sector, while the problems are spread out across society at large, appearing on no specific balance sheet.

To this end, the Natural Capital Project, a group based at Stanford University, California, has developed a suite of computer programs called InVEST, which will analyse and map ecosystem services. InVEST allows farmers, landowners and government officials to make better-informed decisions about the current and future costs of an activity.


I'm a big proponent of figuring out how to devise smart strategies to make conservation both possible and profitable.  I recognize that without new mechanisms to allow people to make a living off the land by means other than logging, grazing, mining or otherwise destroying natural habitats, the loss of critical ecosystem services and biodiversity will continue.

That said, I also recognize 'Slippery Slope' argument -- the potential that valuing nature will provide new justification for destroying it.  But I haven't heard enough from the Slippery Slopers about constructive suggestions for solutions.  The status quo isn't working.  If you're against payments for ecosystem services, what do you suggest are viable solutions with bright prospects for reversing habitat destruction and biodiversity loss and maximizing the resilience of ecosystems to climate disruption?