The Future of the American Southwest: Will It Go the Way of the Hohokam? 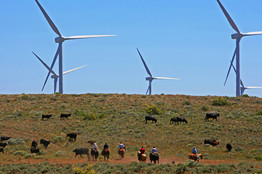 Chris Nelder over at GetRealList takes us along for a ride through the desert Southwest, where he contemplates the future of the region's current civilization, and the implications of possible water shortages for America's energy and food production systems:

What is the true carrying capacity of America, if the San Joaquin Valley’s water problems persist? About one-fifth of California’s total electrical power demand is used to pump water; about four-fifths of the water pumped in California is used to irrigate agriculture.

The ability of the state to build sustainable power supply — like those turbines in Tehachapi — has direct implications on the nation’s food supply. Likewise, much of the population of Los Angeles could not exist without the massive aqueduct system that brings the city water from the Colorado River.

How will the little mining towns of northwestern Arizona fare as fossil fuels decline? They’ll still be able to ship their minerals by rail along the freight tracks I paralleled on Route 66, but they’ll need to have alternate sources of revenue if peak oil quenches economic growth.

Supporting those proposed solar arrays and grid connections could mean the difference between thriving and shrinking, which explains why in a parched, windswept, and sun-baked land like Mohave County, the need for local water and energy supply is urgent enough to override the usual political bent and make strange bedfellows of Republicans and renewable energy advocates. Such alliances will become more common in a century of decline. Necessity wins over ideology every time.


In a time of great energy transition, water looms ever larger as an area of our infrastructure and practices that requires a sustainability-based makeover.  As we've blogged here recently, I predict that water will become the next great ecosystem market after carbon.  Herein lies another epic business opportunity to do well by doing good.

I'm interested in hearing about emerging success stories (as well as stories of failure -- such as that of the Hohokam, which are important to learn from), so please do send them my way.  I'm especially intrigued by stories about the emerging use of forests and other healthy ecosystems to provide water provisioning and filtration services.