One of the most powerful realizations that I came away from Climate Camp with is that without even knowing about the scientific concept of "global warming", local peoples around the world are noticing rapid changes in many aspects of their surrounding environment. I heard firsthand how climate change is impacting a lot of peoples' lives now from one end of the world to the other:
The list of ways that climate change is impacting both the environment and people's livelihoods and security now went on and on, from arctic to tropics, mountains to oceans, forests to grasslands.

For people on the land--from nature reserve managers, to ranchers and herders, to farmers--climate change poses huge challenges. Are there ways to adjust their management practices that will enable them minimize the impacts of climate change on both their surroundings and their livelihoods? If they learn how their climate is predicted to change (e.g., that it is predicted to become hotter and drier, or perhaps wetter), are there ways that they can adjust their land management practices to minimize the impacts of these changes on both the environment and their livelihoods?

Fortunately, the answer is "yes!" Still better, the associated management changes recommended by experts to promote resilience to climate change promise to benefit not just the health of the environment, but also people's livelihoods, health, safety and quality of life.

Let's take the example of grasslands and ranching in California, U.S.A. (pictured below), where climate change is predicted to bring more rainfall, though also more frequent and intense droughts. An increase in rainfall is likely to worsen an important non-climate-related (but still largely human-caused) problem these 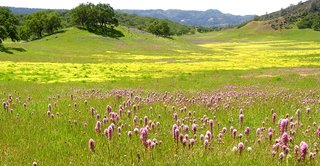 grasslands are already suffering from: the rapid invasion and spread of non-native weeds.

These weeds not only harm California's grasslands by pushing out native plants and animals, but they also reduce ranchers' profits. For example, they are estimated to cost even the sparsely-populated state of Montana, U.S.A. over $100 million per year in control costs, lost productivity, reduced ranch real estate value, and other damages!

When drought and destructive land management combine to reduce the abundance of native species, the result is often to open the door to replacement of the native species by weedy invaders. If the native species are sufficiently decimated, it is the weeds that are left to flourish when years of high precipitation follow drought.

What can grassland managers do to prevent climate change from worsening weed invasions that harm California's native plants, animals and ranchers alike? Weeds are not only favored by climate change, but also by things like overgrazing and the presence of roads and off-road vehicles (ORVs). Vehicles spread weed seeds along roads, and livestock and ORVs both spread weed seeds and create the types of disturbances that allow weeds to push out native species. By preventing and minimizing these non-climate-related causes of weed invasions, managers can also help protect against climate change's potential impacts. Even better, since weed invasions cause extensive economic harm, the management strategies that minimize impacts of climate change on invasions will also save grassland managers money.

In the Paramos grasslands of the northern Andes Mountains of South America, local people face a different suite of threats and solutions. Here

millions of people get their drinking and agricultural water from glaciers that are predicted to disappear within the next several decades due to global warming.

Water flows from the glaciers into the Paramos, alpine grasslands that lie between the glaciers and the human communities below. With rich, sponge-like soils and vegetation, the Paramos provide the environmental service of acting like a massive water factory, capturing and retaining water and then releasing it slowly to the lowlands below.

Any changes in land management, such as new infrastructure development (e.g., building of extensive road networks) or heavy livestock grazing, that compact the soils and shrink the ability of the system to capture and hold water, will (1) reduce the Paramos' environmental service of providing a buffer against floods (by reducing absorption of water during extreme wet weather events) and (2) reduce its ability to provide a buffer against drought, since like a damaged sponge, the soils will have lost some of their capacity to store water. Management practices that maintain the health of the region's plants and soils will therefore provide valuable benefits to the communities below, protecting them against both the threat of torrential floods, and the threat of increased drought (and its impacts to their supply of drinking and agricultural water), posed by climate change.

Currently, few people on the land, even among educated management experts with university degrees, are aware of this new need to factor climate change into their stewardship practices. Fortunately, lead by some heroic conservation and management experts at the World Wildlife Fund, Conservation International and The Nature Conservancy, strategies for managing natural systems to maximize their resilience to climate change are beginning to emerge. Let's hope that with effective communication and education campaigns, these strategies permeate the cultures of natural resource managers in time to build the resilience of natural systems to climate change.