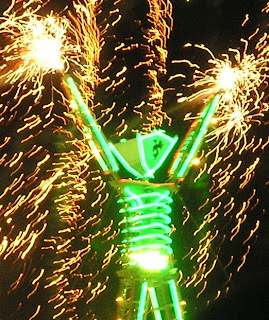 "Green Man was a joke", my friend said to me yesterday when I asked her what she thought of how green Burning Was in 2007, the year its theme was "green".

While in many senses, I think she was right -- Burning Man has a ways to go before it can be considered a bright green event -- I observed some wonderful progress toward this end in 2007.

Starting With Myself - A Conservation Biologist Goes to Burning Man

Feeding off the spirit of The Green Man, we ditched the RV this year and headed down to Black Rock City in my Toyota Highlander hybrid, spending a decent chunk of our drive - and just about all of our 10 mph driving on the playa - in electric mode. Upon arriving at Ninja Camp, we rolled out a green set-up that drew kudos from such friends as a co-founder of the Bay Area's rising green networking night, EcoTuesday: Others in Ninja Camp fueled their rope lights with an electric generator charged by a solar panel, ate organic and local, and used a lot of similar green products and practices. None of us were perfect, but we did our best, inspired by the spirit of The Green Man, and of course our plain ol' passion for being green. It was all so easy that there's no reason we won't do it again in 2008, and again, and again... And not just at Burning Man!

How Green Was Everything Else? 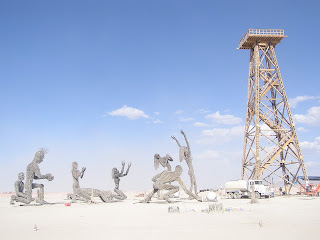 As we giddily pulled past the greeters and cruised slowly towards 'home' at 9:15 and Arctic, it was immediately clear that we were far from the only ones who'd taken the Green Man theme to heart. Even as we arrived at the greeting station, the car to our right was a 50+ mpg Toyota Prius. Riding around the playa over the days to follow, I observed several biofueled VW's and Mercedes, as well as more solar installations than I can remember having ever counted down at Black Rock.

The box office, itself, was run by royally-green In Ticketing, who as they note on their web site, not only plant one tree per ticket sold, but:

are committed to green business practices, such as utilizing chlorine-free recycled paper with hemp/flax fiber and soy-based inks for ticket printing. An official Green Business, In Ticketing applauds all industry peers that have recently joined them in utilizing earth-friendly products in their businesses.

What else about Burning Man - a 'Leave No Trace' event - was green? Not only do burners cut their carbon footprint by living off-grid during their stay (at least those not using CO2-belching gas and diesel generators), but the main mode of transport on The Playa is the bicycle, giving people days away from their cars. While as at any festival, I observed way too many disposable plastic water bottles, cups and jugs (and forks, knives, and plates), it was clear that thousands of burners shunned these increasingly reviled symbols of waste for re-usable ones. Whether or not their water containers were to be reused or recycled, at least the limited supply of water available to burners encourages (and perhaps even teaches) conservation! 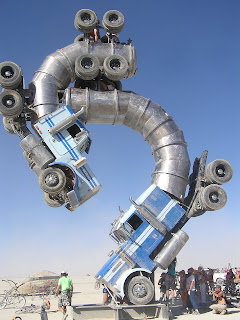 When I heard that The Man had been set on fire on Monday night, I worried that I'd not get to see the Green Man pavilion, which I'd read good things about. So as we rode up towards The Man for our first visit, passing by several beautifully sculpted trees, I was relieved to see the sustainability displays out in force. Beneath The Man, a beautiful tee-pee frame of giant logs, etched with totem-esque faces, held up the festival's 40-foot-tall name-sake figure. Beneath the green canopy, sounds of chirping birds created a serene and meditative atmosphere.

Wandering over to the exhibits on the north side of The Man, the Sustainable Living Roadshow and others held educational booths that illustrated both positive green solutions, as well as negative impacts to our environment, economy and health that can be avoided via sustainability. I was awed by my first-ever close-up look at a solar car, and gawked at a large cartoon chemistry experiment-type machine full of bubbling liquid algae, which was absorbing CO2 being produced by generators. At another station, several burners were doing their best to use playadust-covered computers to calculate their ecological footprint. Over in the shelter to the south of The Man, a maze-like arrangement directed people past strikingly beautiful poster displays that educated in various aspects of the earth's deteriorating vital signs.

Could the pavilion's exhibits have been better? Sure. I'd have loved to see more samples of the types of solutions that people can gradually convert to now to replace their daily products and practices with more sustainable ones (for example, samples of green clothing, electronics, cars, foods, building materials...). It was a very commendable effort though -- especially in the middle of a hot, dusty Pleistocene lake bed -- and I was glad that I got to check it out (and to be a part of Green Man in general). 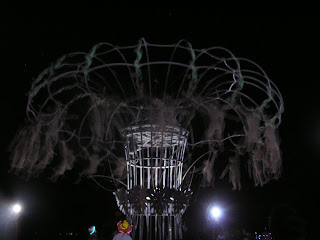 Ultimately, it was the art that I will remember most about Green Man. Without question, several installations left a lasting impression. First was the swinging monkeys - a brilliantly designed mind-trick of animation in which chimpanzee-sized monkeys in slightly different positions hung from a merry-go-round type wheel. As the wheel spun (via peddle power!), rapidly flashing lights created a very real-looking illusion that the monkeys were alive and swinging from metal bar to metal bar.

Second was a 50-foot-long mad-scientistesque contraption that I found in the middle of the playa on Saturday night, and had no idea what in tarnation it was. On one side of a trailer was a loud, noisy steam-billowing engine, with pipes leading down to the other side of the trailer, the sides of which contained planters full of soil and herbs such as lemonbalm, sage, and basil.

After staring in complete confusion at a guy pouring pitchers of unknown goup into a boiler-like tank, a scent reminiscent of roasting coffee beans permeating the air, I had to ask what in the hell this thing was. They were burning biomass to produce energy, he told me, as he pulled up his goggles and wiped sweat from his forehead. What of the plants? One of the byproducts of the burning process, he said, was charcoal that makes for an outstanding soil amendment. Nodding my approval and wishing the guy luck, I hopped on my bike and rode north towards DJ Lorin Bassnectar's El Cirquo set. Truly amazing.

The remainder of my favorite art installations were all related: 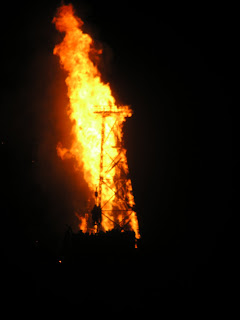 My favorite moment of Burning Man 2007 was, without question, the blowing up of the Crude Awakening oil derrick by its Mutaytor creators. The propane ignition unleashed a mushroom cloud nearly 1,000 feet into the air - a brilliantly orchestrated metaphorical statement that the end of the age of oil is upon us (whether that ends up happening by our choice, or only after we suffer an extremely unpleasant crisis).

What Needs Work - Toward a Greener Burning Man 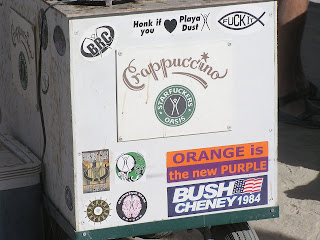 Even the Crappuccino at Starfuckers Oasis way out past The Temple was being offered in paper cups.

How much of burners' recyclables were recycled, and compostables were composted? How many burners will recycle the non-rechargeable batteries that most probably used to power their blinky-lights? The answers to such questions are likely to only be known by soils and groundwater that lie beneath the leaky landfills in which these toxins come to rest.

A Green Future for Burning Man? The Emergence of a New American Dream..?

How can Burning Man 2008 truly build on The Green Man to reflect a new American Dream? A few ideas come to mind as ways to build upon the festival's green resources and efforts:

I - Greener Transport and Power
1. Energize Black Rock City via the power of sun and wind: there is plenty of both on the playa, to say the least! If a few pilot solar and wind-power stations can be set up to help start powering RV's and sound systems so they don't need to burn gas for generators, it would be a huge coup. I'd even bet that a good number of burners would be willing to pay a small fee to be able to plug into this type of renewable power supply, and spare their generators! The electricity needs of The Man, The Temple, and Center Camp should certainly be met via wind and/or solar power.
2. A second option, of course, is to use biofuel-powered vehicles and generators. I've looked through the Burning Man Web Site's biofuels page, but are there any RV renters who offer biofueled RV's? How hard is it to get a diesel generator that can be powered with biodiesel or even straight vegetable oil? I'd love to know! A list of providers should be posted on the Burning Man web site.

II - Reducing, Re-Using and Recycling
The amount of bottled water on the Playa is nothing short of abominable. Who knows what percent of the plastic is recycled (among burners -- a more eco-conscious bunch to be sure -- I'd love to think it's more than average. And huge kudos to RecycleCamp for what they do!). Perhaps Burning Man's organizers can more actively discourage waste, and encourage the use of re-usable water jugs, bottles, cups, and cutlery, as well as biodegradable plastics. Paper used by the festival should be a high percentage of post-consumer recycled content, including toilet paper in the porta-potties.

IV - Education - Connecting Burners With Sustainability Know-How
As the experts in DiCaprio's 'The 11th Hour' noted time after time, raising awareness is key if we are to create the more sustainable society needed to stop and reverse climate change. Burning Man can and should maintain and improve upon 2007's Green Man-type sustainability component. Perhaps fun contests can reward the greenest burners, creating financial incentives that encourage sustainability. Burning Man has been the seed for many a good idea, and the event's coordinators can and should continue to do their part to actively lead the way towards a more sustainable future.

V - Your suggestions? We'd Love to Hear Them!
What are some other ideas that you have for making Burning Man 2008 even greener than Green Man? How can burners help to inspire the emerging American Dream of energy independence and a healthier, wealthier, more secure society rooted in sustainability? Let the ideas ignite!