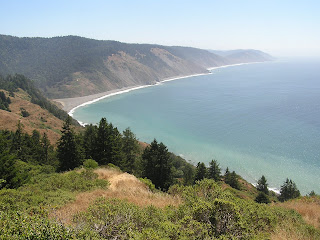 For me, one of the most important values of getting out in nature is its power to de-stress and rejuvenate. I spent this past weekend camping at a favorite spot of mine at California's Lost Coast - just me and Qanuk the collie.

During the week, when crowds are sparse, the Sinkyone Wilderness' lone car camping spot (whose name I just don't want to publicize) is a literal heaven on earth. Following a rugged 5-mile dirt-road drive from Highway 1, one descends rutted switchbacks into a valley full of ancient redwoods, creek-side alders, and a meadow that sometimes contains massive Roosevelt Elk. I've seen both bobcats and bears cross the road on trips in and out. Seals pop up above the surf to get a look at what Qanuk and I are up to as we stroll down the beach. 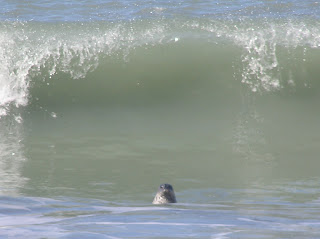 However, on the weekends -- just about every time I've visited, ATVs and other off-road vehicles have literally torn the place up, from its plants and soils to its soundscape, sending beach birds (and couples) diving for cover. Last night, a group of young adults in 3 pickup trucks blasted down a dry creek bed (that was posted as prohibited to motor vehicles) late into the night, smashing over sand dunes, through a creek, doing donuts on the beach. This morning, a couple told me they'd been sitting on the beach quietly enjoying the night and had nearly gotten run over by one of the trucks.

Talk about inexcusably incompetant land management -- Qanuk the Collie could do a better job taking care of the Sinkyone than the California State Park and Tribal officials who are currently in charge. Last night was not one isolated incident. It's gross mismanagement -- failure to control an off-road vehicle abuse problem that's getting worse and worse year after year to the point that a ban is absolutely in order. The problem is not only extremely destructive to the otherwise wondrous unique natural character of the Sinkyone, but is also a clear threat to public safety. 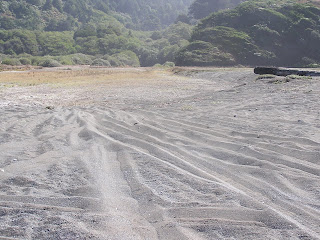 What is it with these (and way too many other) off-road vehicle drivers' complete lack of respect for other users of our public lands (as well as for the land itself)? You tell me.

If it's lack of funding for enforcement that's the State's problem, here's a plan: there's thousands of dollars worth of unticketed violations that occur down there every weekend. Enforcement should be more than self sustaining -- there should even be enough violators to put some to work restoring the damage they've helped cause. 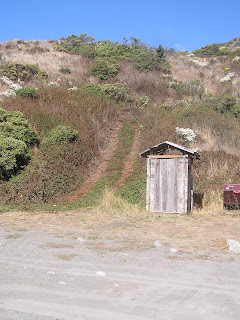 ORV users often clamor for more access, and doggedly fight new restrictions. However, with irresponsible, inconsiderate, and destructive use on the increase not only in the Sinkyone, but across the country, they can only expect to see their favorite past time banned from more and more areas of our public lands.

There's no place like the Sinkyone Wilderness anywhere along the California Coast. It's managers should start to treat it like the gem that it is and ban ORV's from the area.