The First Climate Change Conflicts: Fighting Over Water As Kenyan Rains Tail Off 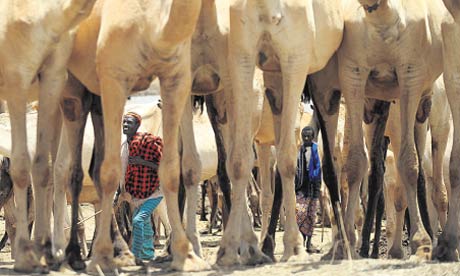 Three years of failed rains have left nearly 4 million Kenyans dependent on food aid. Thousands of animals have died and malnutrition rates are climbing in a drought that has hit pastoralists the hardest. In many areas they're trekking an extra 20 miles in search of water and pasture, their fate determined by careful negotiations with local leaders such as Abdi. His fear of fighting is not unfounded. According to the UN Office for the Co-ordination of Humanitarian Affairs (Ocha), since January this year 306 pastoralists have died from conflicts over scarce resources.
"What we're observing are some of the world's first climate-change conflicts," says Jeanine Cooper, head of Ocha Kenya, in Nairobi. "Tribes have fought over water points before now," she says, "but climate change has increased the frequency and duration of drought, exacerbating the competition over scarce resources."

Forty miles away in the town of Moyale, Molu Dika, drought management officer for the government's Arid Lands programme, agrees that the "future is not bright for pastoralists". He is well informed about climate change. "We used to have drought in cycles of 10 years; now every other year there is depressed rainfall," he says.

As the government struggles to provide the most basic infrastructure the task of adapting to climate change has been left to the NGOs. Leading the way in Moyale is Farm-Africa - its strategy of creating alternative livelihoods has already helped 5,000 households find new ways of generating an income - from haymaking co-operatives to new business ventures in camel meat.
Project co-ordinator Boru Dulacha says that traditional ways of adapting to drought - building water points or managing grazing patterns - are no longer enough. "We want to help pastoralists maintain their traditional way of life, but without them being dependent on livestock to survive," he says.

The changing weather patterns and accompanying conflicts and adaptations seen in Kenya are a microcosm of what's happening in other countries across the world. As leaders prepare for the climate- change conference in Copenhagen, in December, Sir David King, director of the Smith School of Enterprise and the Environment at Oxford University, says: "How we help developing countries adapt to climate change now is critically important - as by the middle of this century there is likely to be an increase in conflict related to resource scarcity."

But climate change alone isn't responsible for these issues, emphasize some experts.  Rather, poor land use practices and repressive policies contribute to the impacts of climate changes:

But how far is climate change responsible for the tensions already escalating in regions such as north Kenya? Idean Salehyan, assistant professor of political science at the University of North Texas, says: "The causes of violence are rarely as simple as resource scarcity." Instead, he thinks conflicts are over how resources are managed and are therefore a political problem as much as an environmental one. "Deliberate policies to reward political supporters and undermine opponents can play an important role in determining the distribution of these resources," says Salehyan. "Countries that are accountable to the needs of their people can withstand environmental disasters better than those with undemocratic governments."


Today, we've journeyed from the Arctic to the Caribbean to Africa learning about impacts of climate change affecting peoples' lives and well being NOW.

Wither the mainstream news networks doing their part to help raise public awareness about these issues?  Too often, the storyline remains that climate change is some distant environmental issue irrelevant to our well being.  As these stories demonstrate, the impacts of climate change are very much here.