U.S. and China Announce Plan For Collaboration on Clean Energy and Climate Change 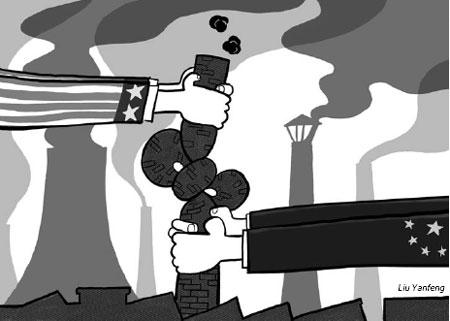 In a very good piece of news to head into your weekend with, the U.S. and China actually did MORE than expected in their announced plan for collaboration on Clean Energy and Climate Change.  As Grist and Climate Progress report:

Tuesday, a comprehensive plan for U.S.-China cooperation on clean energy and climate change was announced in Beijing by President Obama and President Hu Jintao. The overall plan is much more ambitious in scope and depth than we had anticipated and contains directives to create various institutions and programs addressing a wide array of cooperation on clean-energy technologies and capacity building, including very important efforts on helping China build a robust, transparent, and accurate inventory of their greenhouse gas emissions.

These efforts include cooperation in the following areas:

In a joint statement, Obama and Jintao agreed on a common approach to achieve a successful outcome in international climate negotiations (emphasis added in bold):

Regarding the upcoming Copenhagen Conference, both sides agree on the importance of actively furthering the full, effective and sustained implementation of the United Nations Framework Convention on Climate Change in accordance with the Bali Action Plan. The United States and China, consistent with their national circumstances, resolve to take significant mitigation actions and recognize the important role that their countries play in promoting a sustainable outcome that will strengthen the world’s ability to combat climate change. The two sides resolve to stand behind these commitments.


It's a good thing we currently have strong Executive Branch climate and clean energy action to help offset the intractability of the U.S. Senate, which through its bickering is only making itself irrelevant on these critical issues.