Guest Post: In Copenhagen, The Islands Have Their Say 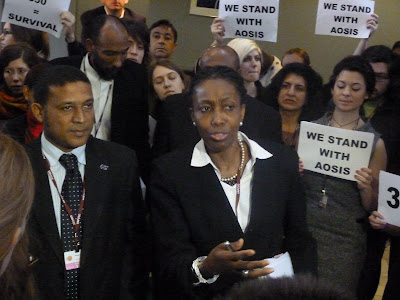 Hearing from those directly impacted by climate change, such as head of the Association of Small Island States, Dessima Williams, (above) reminds us what’s at stake for dozens of nations and their millions of citizens.

COPENHAGEN, COP15 - We were heading into a briefing for civil society by United Nationns Framework Convention on Climate Change (UNFCCC) head Yvo de Boer, when I noticed a gaggle of cameras and a crowd of conference-goers gathering a short distance from the auditorium entrance. I slipped out of line, and as I edged closer, I realized AOSIS (Association of Small Island States, a bloc of 43 countries) was holding a press conference to lay out the group’s negotiating position.

In the wake of the uproar over Tuvalu’s proposals the previous day, here was another bold statement by island nations. The first speaker, Dessima Williams of Grenada and head of AOSIS, was quite articulate. She emphasized AOSIS are on the “very frontlines of the impacts of climate change.” Many have already suffered damage, and will be subject to greater impacts in the future.

Watching her, it really hit me: these people are fighting for their homes. With global warming and rising sea levels, whole communities might simply disappear under the waves. I had understood this conceptually, but to hear someone facing this prospect make such a calm, yet impassioned statement -- when essentially everything is at stake -- somehow made the story became real for me in a way it hadn’t been before. For them, it’s not merely an academic discussion of how many percent, from what base year, under what scenarios. It’s not a political question of “What’s acceptable to domestic audiences?” It’s a question of survival.

Key demands by AOSIS:
In laying out their position, AOSIS asked for developed nations to shoulder the responsibility for their historic emissions and for the whole world to take appropriate action to stave off disaster. Williams noted that AOSIS countries would be doing their part: several nations will follow the example of the Maldives and pledge to go carbon neutral. Many more will implement renewable energy plans. Their message: We are doing our part. We did not even cause this problem, but we are doing right by the climate, and the rest of the countries need to follow. Otherwise, our homes, our livelihoods, our very way of life, are lost. They encouraged the throng of supporters (who carried "350 ppm" and "We support AOSIS" signs) to keep up the pressure. 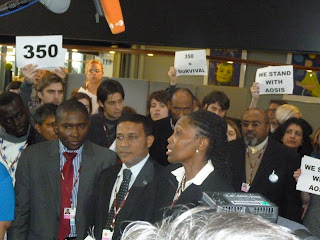 Left to right: Selwin Hart of Barbados, AOSIS negotiator, Mohamed Aslam, Minister of the Environment for the Maldives, and Williams)

The speakers were adamant that these were fundamental demands, but it remains unclear whether this action was meant to stake out an aggressive negotiating position to create space for a more favorable agreement, or if these are really make-it-or-break-it conditions. In any case, with 2 degrees of warming, some islands are still going under, and we’ll have populations, or even whole countries, that will be forced to migrate.

For us in the United States, a climate treaty usually calls to mind energy efficiency and renewables, cleaner technology and greener jobs—things that I wholeheartedly support and that many of us are willing to dedicate our careers to achieving. We see in a global agreement a catalyst to help renew American society and move it toward a more sustainable path.

But sometimes it’s good to hear from those who are first in the line of fire, whose lives are directly impacted by the challenges we face. Such stories paint a clear picture what’s at really at stake -- not just the economies, but the very existence, of dozens of nations.


Kevin Hsu is an M.S. Candidate in the Atmosphere/Energy Program of Stanford University's Department of Civil & Environmental Engineering


For video of Dessima Williams’ speech:
More details on AOSIS and their statements: