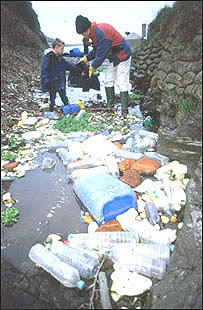 A new documentary film illustrates the environmental, economic and health damage caused by the proliferation of bottled water:

With style, verve and righteous anger, the film exposes the bottled water industry's role in suckering the public, harming our health, accelerating climate change, contributing to overall pollution, and increasing America's dependence on fossil fuels. All while gouging consumers with exorbitant and indefensible prices.

Claire Thompson summed up the problem well in her post on the movie at Grist:

"Not only is it [bottled water] a clear waste of resources (only 20 percent of plastic water bottles used in the United States are recycled, and far too many of the rest probably end up in the Pacific Garbage Patch), it's an incredible waste of money for consumers, who pay more than the price of gasoline for water that's marketed as "pure," but in reality is largely unregulated, full of harmful toxins like BPA, and far less safe for drinking than free tap water. (In fact, 40 percent of the time, bottled water is nothing but municipal tap water, freed from the government oversight that keeps it safe.)"


The main excuse that I hear from people who abuse bottled water is convenience.  For example, in my martial arts dojo, they offer bottled water for $1, and almost every student uses it.  I bring my own stainless steel water bottle, and have never had to purchase a single plastic bottle. So to me, the 'convenience' line doesn't hold water (no pun intended).

My Sensei agrees that we should try to find a better solution, but the owner of the dojo apparently insists on the disposable plastic water bottles for the convenience of kids classes, in particular.  That's the excuse he received for why the solution I proposed wouldn't work: changing to a water cooler and re-fillable 5-gallon jugs, with compostable plastic cups.  Apparently, the cups would make too much of a mess.  Plus, it wouldn't be as easy to re-coup the costs by charging per cup as it is to charge for a water bottle.

Then again, if she charged $1 per 12 ounce CUP (usually filled to 11 oz), she'd bring in about $58 per 5 gallon jug -- and with bottled water delivery services, these jugs cost about $5-8 each. Even with the added cost of cups and disposal, it would still be a money-making green solution!