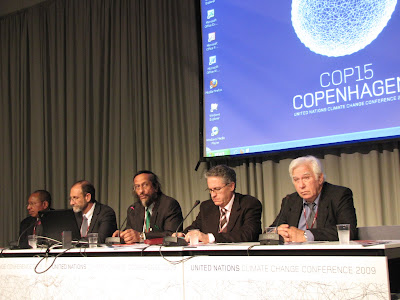 "I woke up this morning crying, and that's not easy for a grown man to admit," the representative of the tiny Pacific island of Tuvalu said, choking up as he addressed the plenary crowded with hundreds of delegates. "The fate of my country rests in your hands." He argued passionately for strong and legally binding emission cuts as soon as possible, speaking for citizens of atolls and islands around the globe that could disappear in the next century from rising sea levels.

While the first week of negotiations has drawn to a close in Copenhagen, the delegates of the 192 nations present will likely be up all weekend and late nights trying to hammer out a deal addressing global climate change. As a student in this bewildering maelstrom, I want to offer my perspectives on this conference so far by relating several stories and observations.

Judging from the media storm covering the event, it’s hard to get a clear picture of what happens here, even inside the conference as a participant. And of course, none of us in the Stanford delegation have much clue of what’s going on inside the closed negotiation rooms. Nonetheless, here are some of the shards of clarity that seem to be constructing themselves within the walls of this center that resonate.

Nothing will be simple

Attending all these side events, one thing is eminently clear – the world is a very complex place and similarly, addressing climate change spans endless facets of science, economics, ethics, politics, justice, and law, just to name a few.

Let me illustrate this. I wrote last time about the exciting talks I heard on the mechanism called REDD (Reducing Emissions from Deforestation and Degradation). The theory is that by providing economic incentives, the developed world can help the developing world slow deforestation (which is important because deforestation accounts for about 20-25% of global carbon emissions). This is a very cheap way of reducing emissions for both parties and it provides immense multiple benefits: preserving biological diversity, maintaining valuable services that ecosystems provide to people (such as air and water purification), and helping rainforest nations provide jobs and other means for rainforest peoples to support their families and local economies.

It’s an easy win-win situation, right? Not quite. I first went to a series of talks in which officials from Google, several Stanford scientists, and several non-governmental organizations were talking about pilot projects and how REDD can be measured.  Measuring the emissions reductions provided by forests is no trivial task, I assure you.  You have to be able to measure the amount of carbon in a tropical rainforest by satellite, and be able to detect losses of forest from satellite). But even if you can measure it, you still have to design the REDD framework (a political and logistical process, with plenty of economic and law analyses), finance it (an international negotiation and political fiasco), distribute the finances (dealing with weak capacity and sometimes corrupt governance in these countries), scale it across nations very quickly (business, engineering, and organizational challenge), and then monitor the success.

Even then, you’ve left out very critical ethical and moral dimensions of respecting indigenous people’s rights (who, understandably, don’t like being told what to do with their lands).  Thus, any REDD scheme has to involve local community input and participation.

Compound that with growing global demand for cropland and food, timber and other resources, and you get my point. Implementing REDD is one of the areas in which there is striking agreement among nations conceptually, but until the details are worked out, it is not a simple nor guaranteed-to-succeed solution.

We have shared ground

It’s easy to focus on disagreement and controversy. As frustrations mount this next week leading up to the conclusion of COP15, and as protestors and demonstrators make a show outside and in the city, it’s easy to lose the message in the windstorm. There are tough issues. There is immense urgency. No one will be 100% happy with what comes out of these agreements. But it has become immensely clear to me how much shared ground we have.

I spent a summer on an atoll that, like Tuvalu, is in danger of disappearing forever within my lifetime. I was advised by a Stanford English Professor and poet to “go somewhere where something is about to disappear forever from the world.” I followed her advice and my life has never been the same since.

Opportunity for the future

I heard a fantastic talk by a person from a U.S. consulting company, who emphasized the absurdity of the idea that solving climate change is going to destroy economic prosperity. The point of the talk was that climate change policy is an immense opportunity to drive sustainable economic development for the US and the world.

He cited a McKinsey & Co. report that found that replacing all fossil fuels in the US electricity generation industry with renewable energy would lead to a net increase in US jobs. He concluded his point by joking that perhaps we should ask the coal miners whether they would prefer to mine coal or not. (Editor's note: I'd love to ask a coal miner whether they'd prefer to manufacture and install wind turbines and solar systems that help wean America off of our oil dependence.  If any readers have ever had this type of conversation with a coal miner, please let us know in the comments, below).

As far as an update on the actual negotiations, preliminary drafts of text have been released by the major negotiation parties, which is a major first step (according to a lead U.S. negotiator that we were briefed by, this is amazingly early). A lot of the hardest things have not yet been negotiated, so a lot of work remains.

I like to think of it as a hurricane, a climate-change intensified gale-force storm, if you will. Each person, each organization, each blog post, each idea comprises a water droplet flying through the chaos. No one person can understand or navigate the storm, but it is gaining momentum. And the beauty is in the reflections of millions of water droplets and the crystalline images of the faces in the winds.

Let’s hope we address the storm before Tuvalu disappears...

Bill Anderegg is a graduate student of National Academy of Sciences member and Stanford climatologist, Dr. Stephen H. Schneider.  He is currently attending COP15 in Copenhagen as part of the Stanford delegation.
...