To Save Fish, Conservation Loops in the Locals 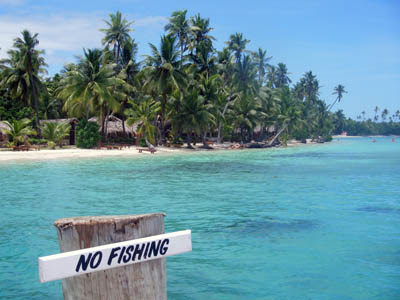 This Discovery article reports on an adaptive effort in Fiji that is meeting with some success:

Not far from one of Tuivuna's favorite dive sites in Fiji, a group of remote villages is working hard to have it all -- tourism, biodiversity and cultural resiliency. About 1,000 people live in the Kubalau district on the island of Venua Levu. Among the members of one local village, Kiobo, 33 have completed ecotourism courses and are eager to host guests.

Scuba divers already have to pay $25 Fijian ($13 U.S.) to dive in the nearby Namena Marine Reserve, which is located inside the Kubalau's traditional fishing grounds, called Quoliquoli. The money goes toward conservation and scholarships.

Through divers and other tourists, the people of the Kubalau hope to bring in even more money that could buy the village some of the things they don't have, including electricity and running water.

"There is a really strong desire through a lot of communities to really come together," said Stacy Jupiter, Fiji's program director for the Wildlife Conservation Society. "It can work."

In the 1980s, ecotourism sprang up as a simple attempt to make money out of nature and people's desire to see it.

At the 1992 Earth Summit in Rio de Janeiro, leaders from more than 150 nations (not including the United States) agreed for the first time that protecting biological diversity needed to be an essential consideration during the process of development. As a result, USAID, the World Bank and other agencies began funding so-called Integrated Conservation and Development Projects. From Mexico to Guyana, hundreds of ICDPs attempted to address the needs of local people and involve local participation.

As much as those projects made sense in theory, results were mixed and backlash followed, Merelender said. Indigenous groups were angry about new limitations on their ability to hunt, fish and cut down trees.

Moving forward, Merelender said, conservationists are focusing more on the trade-offs involved in trying to protect parts of the Earth where people have lived for many generations. They are admitting that compensation is sometimes necessary, and that people have always impacted the planet -- and always will.

But figuring out what success means is still a work in progress.

"Both man and nature are so complicated, no simple picture is going to allow you to predict what will happen if you change what you are doing," said Les Kaufman, a marine ecologist and conservation biologist. "It's an adaptive dance. We make a move, and we see what nature does."


Trying is the only way to succeed -- kudos to these folks for what sounds like an excitingly innovative approach that I look forward to following.  In fact, I'm sure craving a trip to Fiji right about now...